When is the best time to go for a long-distance walk in Britain?

There are four main factors that most hikers take into account when planning their next trip:

You take a risk walking in the UK at any time of year. Britain has a famously unpredictable climate, and as a nation we’re brilliant at complaining about it.

But I am going to stick my neck out here and say that, actually, it’s not as bad as we make out. I’ve often had really good weather on the trail. For example, on the South-West Coast Path myself and Joel can only remember two occasions when it rained over the 53 days it took us to complete the trail. 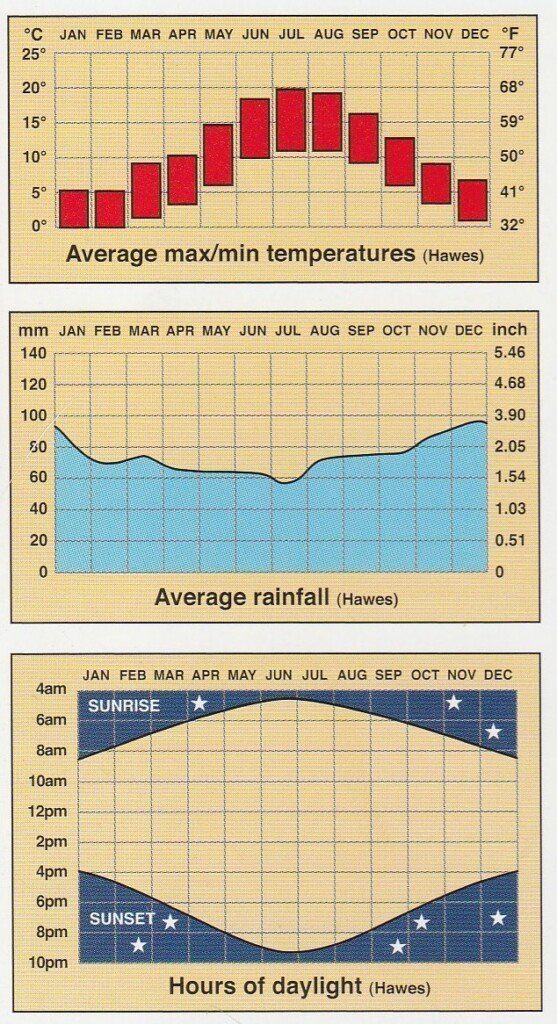 Even on the  Pennine Way I experienced so little rain – just a few drops on the last day as I staggered into Kirk Yetholm – that I almost felt like I’d cheated. This, after all, is a famously soggy trail – and yet I’d managed to coincide my adventure with a period of intense heat and sunshine, when the country got so hot that nearby Saddleworth Moor caught alight.

Even when hiking out of season I’ve managed to have enough warm, clear days to take photographs for the books.

Of course, if you have the ability to head off on the trail at a moment’s notice then you can deliberately time your trip to coincide with a predicted dry spell. But many people can’t, and so you’ll have to just make an educated guess when the best weather is going to be.

Hopefully, the charts (which are focussed on Hawes on the Pennine Way, but which, for the sake of this discussion, more or less apply to everywhere in Britain) will help. From them, it’s clear that most people will want to walk between late March and early October, when the weather is at both its warmest and, even more importantly, its driest too.

This is a big factor for many experienced walkers, but one that’s often overlooked by many. Simply put, walking on a trail is much nicer when there aren’t several hundred people on the same trail as you. If you’re on a coastal path, it’s also much more pleasant arriving at a seaside resort when it isn’t heaving with other visitors. It’s also much more pleasant if you don’t have to book your accommodation months in advance, or wait for an hour just for a table at a cafe. 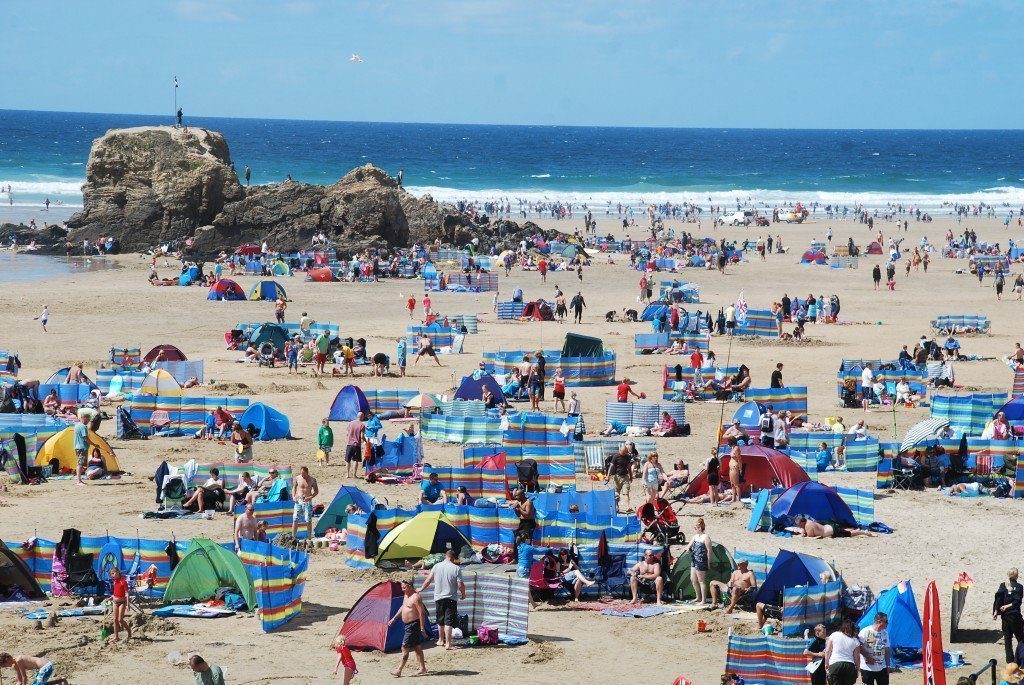 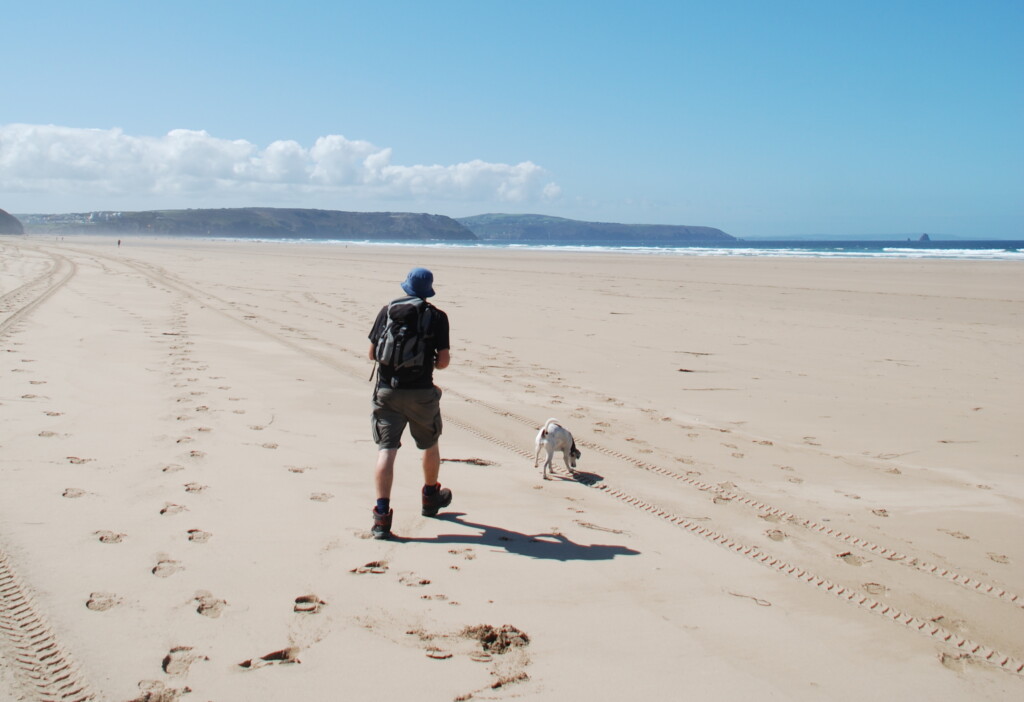 There are few things more depressing on a trail than to turn up at a cafe after several hours of walking, only to find it closed. Many establishments open only from Easter to October. This includes many campsites, tourist attractions, rural cafes and some B&Bs too. These places close down altogether for the winter. So while a winter walk can be a lovely experience, most hikers will want to hike when things are actually open.

4) The scenery and flora

This is perhaps the least important factor of the four for most hikers, but I think it’s still pretty salient, particularly if you like your photography. Simply put, if you’ve come on a walk because you want to see some beauty, then you may as well choose to hike when that beauty is at its greatest. For many, that means spring, when the flowers are in bloom and the leaves are on the trees.

SUMMARY: THE BEST TIMES TO WALK IN BRITAIN

What the average walker wants is to find that sweet spot where all four of the above criteria are satisfied. If you were to construct a Venn diagram, then you want those months that it is clear that there is one period of the year which fulfils all of the above: the period between the end of the Easter holidays and the start of the summer holidays (though excluding half-term week). 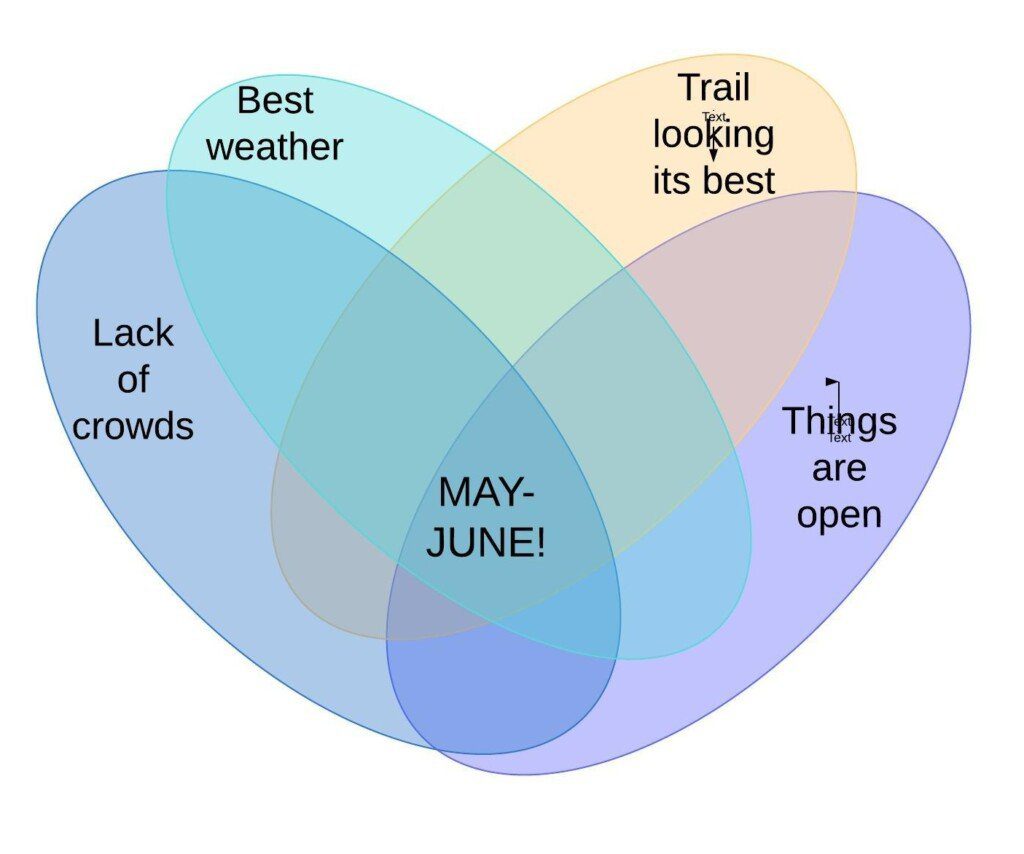 The exact dates for this vary from year to year, of course, depending on the precise dates of Easter (which can be as early as 22 March and as late as  25 April) and the school holidays, which vary from county to county.

So as a general rule, let’s say that May & June are the best months to walk, though try to avoid the week-long half-term school holiday that falls in those months if you can. Any days in late April or early July that don’t coincide with a school holiday are also ideal.

September to early October is our second choice, after the school holidays but before the days get too short, the leaves fall off the trees, the path gets too muddy and the temperature drops too significantly. As a bonus, I find that businesses along the trails are a bit friendlier at this time: with the frantic rush of summer over and having made their money for another year, people are more flexible, more laid-back and relaxed, and they have more time to chat too.

If you can’t avoid the school holidays, then I would choose Easter over summer. The weather may be a little less reliable, but the paths, towns and holiday hotspots tend to be a little quieter. 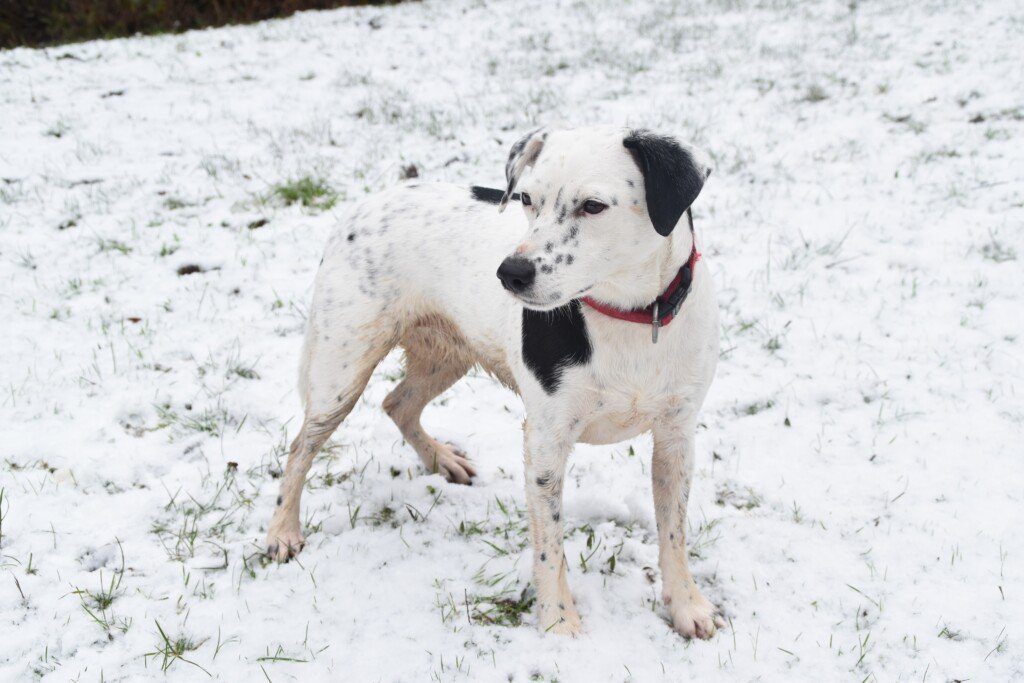 If you can’t walk at any other time except autumn or winter, then we still recommend it. There is only one trail – the Hadrian’s Wall Path – where winter-walking is actively discouraged, so you don’t disturb and damage the unexcavated archaeology underneath the path. (Please don’t walk on this path at this time. The authorities have devised alternative trails that you can follow, some of which take you up to the Wall without actually walking along it. Visit the National Trails website for details.)

But on other trails a winter walk can be an invigorating, contemplative and serene experience.

The important thing is to be prepared. In particular:

Make sure you have warm, waterproof clothes, including good, strong, waterproof boots and a first-class waterproof jacket and trousers too. Make sure you carry a dry set of clothes as well for the evenings. (These, of course, should be carried inside a waterproof bag.) Gloves and woolly hats may also be necessary.

When planning your  itinerary, bear in mind that the days are much shorter, and that the sun may not rise until 8am or later, and may disappear as early as 3.30pm. For this reason, always carry a torch.

Remember to contact your accommodation in advance, if only to make sure that your campsite/hostel/B&B is open.

I would camp only if you have equipment that is capable of keeping you warm and dry in winter, and if you’ve had winter-camping experience too. Camping barns and bunkhouses run by the local farmers are a decent alternative in winter, sheltering you from the worst of the weather, though again make sure they’re open.

Trekking poles may be a good idea as the path is likely to be a lot more slippery due to mud and ice.

If you’re walking alone then it’s even more important that somebody knows your itinerary for the day, and can check you’ve arrived. Because if you do get into trouble on the trail, there won’t be many people around to help you.

Do read our page on safety on the trail – given the likelihood of bad weather and the lack of people on the trail in winter, it’s important you know what to do if you get into trouble.