The contributors to this site are all authors who have written guides to the long-distance trails of Britain for the publisher Trailblazer.

This site was built and is maintained Henry Stedman. I’ve been writing guide books for the past 25 years including several of the titles featured on this website. They are the Trailblazer guides to the Hadrian’s Wall Path, Coast to Coast, Dales Way, North Downs Way and the Cleveland Way. I am also the co-author, with Joel Newton (see below), of the three guides to the South-West Coast Path.

For those trails that are featured on this website which I didn’t write, then they were written by one of my colleagues, and I merely updated them for a subsequent edition. So my knowledge of these trails is perhaps greater than that of the average hiker, but not as comprehensive as that of the author!

Joel Newton is the author of Trailblazer’s guide to the Thames Path and the co-author of the three guides to the South-West Coast Path. He has also updated a numerous other guides, including Offa’s Dyke, Cornwall (again)!, Exmoor and North Devon (again!!) and the West Highland Way. He has walked several other trails too, including Cotswolds Way, Great Glen Way (which is not yet on this site), the Hadrian’s Wall Path, and sections of the Pembrokeshire Coast Path and the Pennine Way. 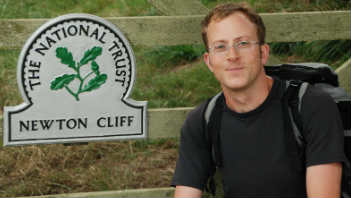 When not tramping around the UK, Joel’s day job involves working with the homeless in Hastings.

Daisy is Henry’s dog but any thoughts that ownership equates with control can be dismissed on this occasion. One part Parsons Russell Terrier to nine parts mischief, Daisy is the real brains of the outfit, though is happy for others to take the glory.

Together with her less sophisticated human companions, she has walked all of the trails featured on tis website save for the West Highland Way – and has the certificates to prove it.

Why does this site exist?

The idea behind this website is to provide a more honest appraisal of the long-distance trails in Britain. I love walking, and I love all of the trails that feature on this website – (yes, even the Cotswold Way). But I also think that other walking websites tend to be too positive about the trails, and ignore the path’s negative aspects. Of course, they have a duty to do this. For example, the whole point of the National Trail website is to promote the trails that it looks after – so while their site is comprehensive and very useful, it doesn’t give you the whole picture. While pretty much every other website has been established primarily to sell something – tours, guides, baggage-carrying services etc – so they aren’t going to tell you the whole truth either.

We’d love you to contact us for whatever reason you want. If you have any recommendations about how to improve the site do send them in and, if we like your suggestions, we’ll try to incorporate them. Similarly, if you have any praise for this website or the books then that’s more than welcome too! But even if you have nothing but criticism then yes, we’ll still welcome your messages and I promise we’ll take it all onboard; then, having digested it, we’ll do what we always do, which is blame the dog.

Just fill out the simple form below with your thoughts, opinions, comments and criticisms – and I promise I’ll respond as soon as I am able. Thanks!